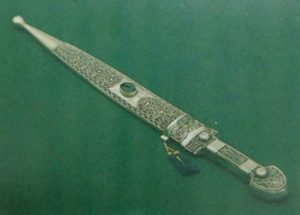 The gift was presented to President Kim Il Sung by the president of Kalmuck University of Russia on his visit to the DPRK in April Juche 81(1992).
Regarding his DPRK visit as a great honour, he discussed with his family members on several occasions before choosing a silver-decorated knife as a gift according to Russia`s traditional custom.
Conveying the gift, he said: “President Kim Il Sung is the greatest man who has followed the long road of revolution overcoming all manner of trials and who has translated his grandiose plans into reality.  Endowed with noble personality traits and strong will, he founded the Juche idea, a great idea shining all over the world, to lead the cause of socialism along the straight road of victory for his country and people. I am convinced that his revolutionary cause will be accomplished as brilliantly as the beautiful patterns on the knife.” 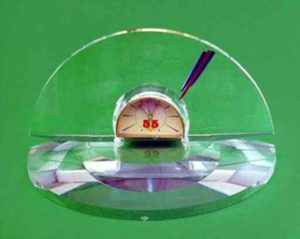 This was presented to Chairman Kim Jong Il by the general manager of the Institute of Technical Glass Science of Russia during his visit to the DPRK in October Juche 89(2000).
He is said to have buckled down to manufacturing the gift in person to reflect his heartfelt respect and admiration for the Chairman. The semicircular bottom made of special glass refers to the earth and the rising sun over it the leadership of President Kim Il Sung and Chairman Kim Jong Il. Engraved at the centre of the clock is the figure 55, symbolic of the 55th founding anniversary of the Workers` Party of Korea, and its hour, minute and second hands depict a hammer, sickle and brush of the emblem of the WPK.
Conveying the gift, the general manager said that it was made of special glass and metal in the meaning that the earth rotates following the WPK. 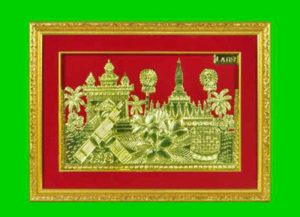 The Central Committee of the Lao People’s Revolutionary Party prepared a gilt craftwork depicting such symbols of the country’s culture as the national flower, an old pagoda and a traditional instrument in reflection of high respect and admiration for the respected Comrade Kim Jong Un who develops the Workers’ Party of Korea into an invincible party with an iron will as he brilliantly carries forward the ideas and cause of President Kim Il Sung and Chairman
Kim Jong Il. The gift was conveyed by its delegation that visited the DPRK on the occasion of the 70th anniversary of the WPK in October Juche 104(2015).
As he conveyed the gift, the head of the delegation said that he was happy to present the gift from the Central Committee of the LPRP to respected Comrade Kim Jong Un on the occasion of the 70th founding anniversary of the WPK.
Share
Facebook Twitter LinkedIn Tumblr Pinterest Reddit VKontakte Odnoklassniki Pocket Share via Email Print