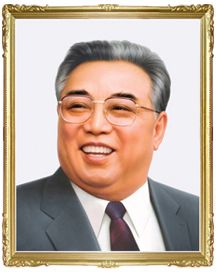 His father named him Song Ju, hoping that he would become the pillar of the country.

He spent his boyhood moving frequently to various areas of Korea and China with his parents, who were engaged in revolutionary activities.

He gained a good command of Chinese because he had learned it at an early age and studied at a Chinese school, thanks to his father’s farsightedness. This made a great contribution to his future anti-Japanese joint struggle with the Chinese people.

In March 1923, he made a journey of 250 miles from Badaogou in China to Mangyongdae, true to the lofty idea of his father that, in order to make revolution, he should know the actual situation in his own country well, and studied at Changdok School in Chilgol, the place of his mother’s maiden home.

In January 1925, he heard the news that his father had been arrested again by the Japanese police, and resolutely left Mangyongdae with a firm determination not to return until Korea had won its independence.

In June 1926, after his father Kim Hyong Jik’s death, he was admitted to Hwasong Uisuk School, a two-year military-political school belonging to an anti-Japanese nationalist organization in Huadian, China, where he organized the Down-with-Imperialism Union (DIU) and was acclaimed its leader on October 17 the same year.

While studying at Jilin Yuwen Middle School, he reorganized the DIU into the Anti-Imperialist Youth League, a more mass-based organization, on August 27, 1927 and founded the Young Communist League of Korea on August 28.

He clarified the path of the Korean revolution and the strategic and tactical problems for the fulfilment of its main task at Kalun Meeting held from June 30 to July 2, 1930.

He formed the first party organization―the Society for Rallying Comrades―on July 3 in Kalun and organized the Korean Revolutionary Army, a political and paramilitary organization to make preparations for an anti-Japanese armed struggle, in Guyushu, Yitong County, on July 6 the same year.

He founded the Anti-Japanese People’s Guerrilla Army (later reorganized into the Korean People’s Revolutionary Army), a standing revolutionary army, on April 25, 1932, led the anti-Japanese armed struggle and liberated the country on August 15, 1945.

He formed the Central Organizing Committee of the Communist Party of North Korea and proclaimed the founding of the Party on October 10, 1945.

He established the Provisional People’s Committee of North Korea, was elected Chairman on February 8, 1946 and made public the 20-Point Platform.

He led the drive to implement the tasks of the anti-imperialist, anti-feudal democratic revolution successfully in a short period of time.

On September 9, 1948, he founded the DPRK, a unified central government of the Korean people, and was elected Premier of the Government, head of state, by the unanimous will of the entire Korean nation.

From June 25, 1950 to July 27, 1953, he led the Fatherland Liberation War to a brilliant victory, safeguarding national sovereignty and starting US imperialism on its decline.

On August 5, 1953, he put forward the basic line of post-war economic construction at the 6th Plenary Meeting of the Party Central Committee and led the struggle for its implementation.

He was elected again Chairman of the Central Committee of the Workers’ Party of Korea at the 3rd and 4th Congresses of the WPK held in April 1956 and September 1961.

He advanced a new idea of uninterrupted revolution and defined the three revolutions—ideological, technical and cultural—as its main contents.

He called the 5th Plenary Meeting of the 4th Party Central Committee in December 1962 and set forth a new strategic policy of simultaneously carrying on economic construction and defence building in order to cope with the increasingly blatant moves of the US imperialists to unleash another war.

He successfully led the drive to implement the historic task of industrialization from 1957 to 1970.

He was elected President of the DPRK according to the new Socialist Constitution of the DPRK adopted at the first session of the 5th Supreme People’s Assembly in December 1972.

He was re-elected General Secretary of the Central Committee of the Workers’ Party of Korea at the 5th and 6th Congresses of the WPK held in 1970 and 1980.

He defined the modelling of the whole society on the Juche idea as the general task of the Korean revolution.

He set forth the three principles of national reunification in May 1972, the plan for founding a Democratic Federal Republic of Koryo in October 1980 and the 10-Point Programme of the Great Unity of the Whole Nation for the Reunification of the Country in April 1993.

He found a brilliant solution to the issue of successor in order to safeguard socialism and accomplish the revolutionary cause of Juche.

In June 1994, he met former US President Jimmy Carter in Pyongyang and created favourable conditions for opening DPRK-US negotiations about the nuclear issue and a north-south summit.

He worked hard for the Party and the revolution, for the country and the people, for global independence till the last moment of his life and died of sudden illness in his office at two o’clock on the morning of July 8, 1994.

He lived up to the motto “The people are my God” all his life.

He was awarded the titles of Generalissimo of the DPRK, DPRK Hero (three times), and Labour Hero.

He met over 70 000 foreign guests including heads of state and government and party leaders, and paid visits to 16 countries on 106 occasions.

He received 372 decorations, medals and honorary titles from foreign countries and international organizations.

His statue was erected in China, the International Kim Il Sung Prize was instituted and is awarded, and more than 480 streets, institutions and organizations in over 100 countries were named after him.