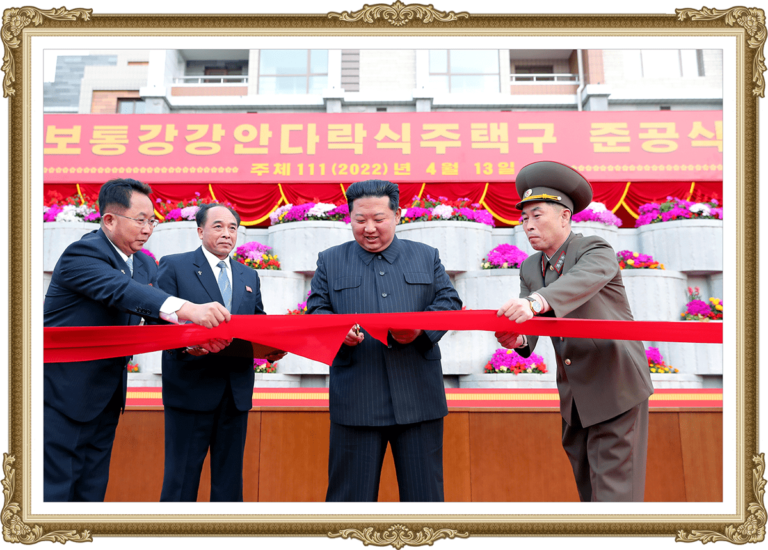 The Eighth Congress of the Workers’ Party of Korea held in January last year set it as one of the important targets of a new five-year plan to build 50 000 flats in Pyongyang.

In April this year, a little over a year later, there arose 10 000 flats in the Songsin and Songhwa area, the eastern gateway to the capital city. Meanwhile, terraced houses for 800 households went up in spectacular forms on the beautiful Pothong River.

These new modern houses were all given free to ordinary working people, as well as to model workers from different sectors of society like innovative workers, meritorious people, scientists and teachers.

The house-building programme in the Democratic People’s Republic of Korea is not designed for the pursuit of financial profit; it is an ennobling undertaking to turn the state’s assets and the fruits of the working masses’ creative labour entirely into their benefits.

The Songhwa Street and the Pothong Riverside Terraced Houses District rose up as a paradise of the times when the country was experiencing all sorts of difficulties and challenges due to sanctions and embargo policies of the hostile forces and the worldwide public health crisis. This is a showcase of the realities of the DPRK where the people are entitled to every element of civilization and wellbeing and where the top priority is given to satisfying their desires and interests.

Now the Korean people are celebrating the 74th founding anniversary of their country, the DPRK, with a great hope and belief that a better future is in store for them.