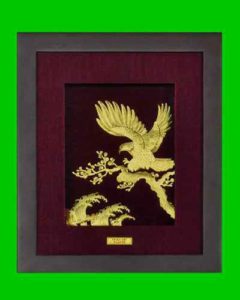 It is the gift presented to President Kim Il Sung from the Slovenian representative of Friendship Association with DPRK in November, Juche 106 (2017).

It vividly portrayed an eagle taking his perch on the branch of a tree in the riverside. There are English letters “The Best Art, Pure Gold 99.9” on the gold-plated surface at the lower part of the frame.

Presenting the gift, he said that President Kim Il Sung devoted his all to Korean people’s well-being and the peace and that Korean people became the strongest people in the world thanks to his wise leadership. 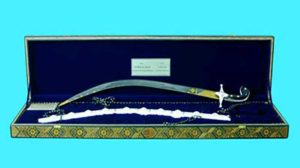 It is the gift presented to Chairman Kim Jong Il by president of the Syrian Arab Republic in December Juche 95(2006).
From olden times it has been regarded as the symbol of historical acknowledgement to be presented only to the generals who earned their fames in the battles to defend the country from foreign invasion and that of sacrificing struggle and patriotism to fulfill the desire of mankind as well.
This sword, as it is made of ingredients that do not change even after hundreds of years, is very majestic and perfect in terms of formative art and the masterpiece of Arabic craftwork and pride of Syrian people. There are the Islamic patterns embroidered elaborately with gold and silver threads on the surface of its sheath also made of gold and silver. 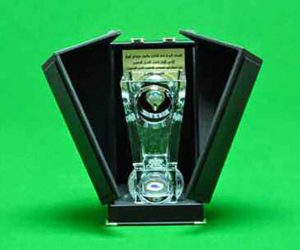 It was presented to the respected Comrade Kim Jong Un by a secretary from the private office of the emir of the State of Kuwait in January, Juche 102 (2013).
Longing for the DPRK with his feeling of respect for President Kim Il Sung and Chairman Kim Jong Il, he was enchanted by the great personality of the respected Comrade Kim Jong Un and prepared it in order to show his highest respect to him.
Crystal, the main component in the gift, is conveying his pure mind and true feelings.
Presenting the gift, he said that he had a greatest honor to present a sincere gift to His Excellency Kim Jong Un and wished him always good health and a greater success in his responsible work.
Share
Facebook Twitter LinkedIn Tumblr Pinterest Reddit VKontakte Odnoklassniki Pocket Share via Email Print