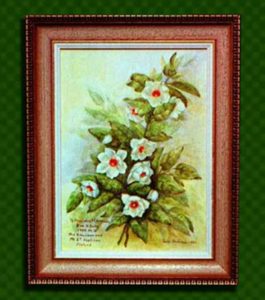 It is a gift presented to President Kim Il Sung by the chairman of the Finnish National Committee for the Study of the Juche Idea, who was also director of the International Institute of the Juche Idea, and his family in April Juche 73(1984).

As he revered the President as the genius of ideology and theory and the outstanding leader of the world revolution, the chairman deeply pondered what kind of gift he would present to him and decided to paint in oil the magnolia of Korea named and loved best by the President.

He collected lots of paintings and photos showing the flower, acquired skills of portrayal and painted the flower on the white cloth prepared by his wife. 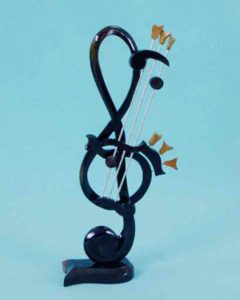 It is a gift presented to Chairman Kim Jong Il by a Cuban delegation in October Juche 99(2010).

The song that was decided on as the national anthem of Cuba after the victorious revolution had been created in October 1868 when the Cuban people started the war for national independence against the colonialists, positively inspiring them to the struggle. As it is in G major, the Cubans love music in this scale and their music is mainly in G major.

Handing over the gift, the head of the delegation said the Cuban people set great store by the friendship with the fraternal Korean people, which had been forged by President Kim Il Sung and President Fidel Castro and which was being developed by Chairman Kim Jong Il and President Raul Castro. He added he prepared the gift out of his wish to bring the great leader of the Korean people even a moment`s pleasure. 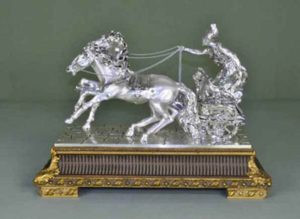 Silver-plated handicraft “Cart Drawn by a Pair of Horses”

It is the gift presented to Supreme Leader Kim Jong Un by the director of a Russian company in November Juche 104(2015).

The Russian decided to present a gift to the Supreme Leader since he was fascinated by his personality as a great man while seeing on TV the DPRK leader delivering an impassioned speech full of confidence at the military parade and public procession of Pyongyang citizens in celebration of the 70th anniversary of the founding of the Workers’ Party of Korea.

The gift depicts a knight driving a cart drawn by a pair of horses.

It is said that the two horses represent the strength and bravery with which to overcome any difficulties and the knight symbolizes a victor returning in triumph who achieves only victory in any adversity.

As he handed over the gift, the director said he was convinced the Korean people would win only victory as they advance under the leadership of the Supreme Leader.