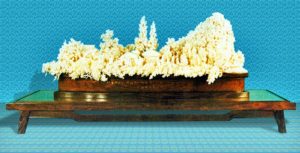 It is a gift presented to President Kim Il Sung by a delegation of the Communist Party of China in the name of the CPC Central Committee on his 65th birth anniversary.

It is said that the CPC Central Committee prepared the gift at the initiatives of Chairman Mao Zhedong and Prime Minister Zhou Enlai.

The experts, who were dispatched to the DPRK on a mission of vividly depicting President Kim Il Sung’s native home at Mangyongdae, learnt in detail and sketched the native home and everything in its surroundings, from position to shape, and collected even tree leaves and petals as samples.

The head of the CPC delegation said as he presented the gift to the President:

“The draft design of ivory carving ‘President Kim Il Sung’s native home at Mangyongdae’ was already ratified by Chairman Mao Zhedong in his lifetime and completed under the close concern of the Party Central Committee. The carvers who were assigned this honourable production task exerted their all energies and sincerity.

“We think that this shows the relationship between our two Parties and peoples of the two countries are very deep.” 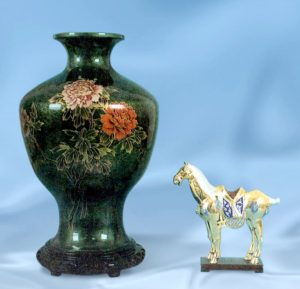 These gifts were presented to President Kim Il Sung by Cambodian King Norodom Sihanouk on his 79th birthday.

The king had long revered the President as the outstanding leader of the world revolution and world’s socialist movement, the peerlessly great man and the father of all peoples, who illuminated the road to be followed by Cambodia and defended his physical life.

The President met and conversed with him in a cordial atmosphere.

On the spot which was overflowing with the feeling of friendship, Norodom Sihanouk courteously presented these sincere gifts to the President.

Three beautiful flower blossoms and a butterfly are depicted on the dark blue surface of the plastic vase, while the golden craftwork portrays a gorgeously-decorated saddled white horse.

The craftwork, whose surface is decorated with diverse kinds of jewels and the portrayal of the white horse is lifelike, is fixed on a square holder.

Presenting these gifts to the great leader, the Cambodian king wished him good health. 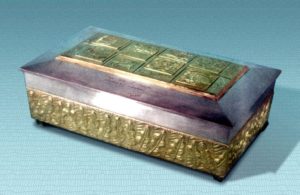 The gift was presented to President Kim Il Sung on his 65th birth anniversary by Josep Broz Tito, chairman of the League of Communists of Yugoslavia and president of the Socialist Federal Republic of Yugoslavia.

Tito, who had revered President Kim Il Sung from the bottom of his heart as an outstanding leader of the world revolution, prepared the gift by reflecting the feeling of praise for the glorious revolutionary history of the President who performed immortal exploits for the times and the mankind.

He ordered to a gift factory to make the special gift.

The cover of the treasure box bears a message which reads, “To Comrade Kim Il Sung, On your 65th birth anniversary, Tito”.

Engraved on the cover are six cities symbolizing six union republics and the two cities symbolizing two autonomous states in the meaning that all the Yugoslavian people offer their congratulations to President Kim Il Sung, as well as animals, buildings and tree leaves including the sun, sea, fish and pigeon.

The gift reflects the desire of President Tito and Yugoslavian people who hope that President Kim Il Sung will lead the Korean revolution and the world revolution to a brilliant victory in good health.