Mt Paektu (2 750 m) is the highest and most majestic mountain in Korea. From ancient times, it has been known as the ancestral and celebrated mountain of Korea. A log cabin where Kim Jong Il was born stands against the background of Jong Il Peak, a wonderful outcrop of cliffs amidst thick forests.

In the latter half of the 1930s and the first half of the 1940s, several secret camps stood around the Paektusan Secret Camp, where the headquarters of the Korean People’s Revolutionary Army was situated. Located in the forests of the mountain, the headquarters was the pivotal centre of the overall Korean revolution.

In those days, Kim Jong Suk, an anti-Japanese heroine, came to the secret camp on Mt Paektu under the leadership of Commander Kim Il Sung of the Korean People’s Revolutionary Army and conducted energetic military and political activities around this area. Kim Jong Il was born in the log cabin in the dense primeval forests of Mt Paektu on February 16, 1942. His birth signalled a bright sunrise promising the completion of the revolutionary cause of Juche started by President Kim Il Sung, the glory of Korea and a source of greatest joy to the Korean people. Inheriting the  blood of a patriotic and revolutionary family and cherishing the soul of Mt Paektu, Kim Jong Il grew up listening to the sound of blizzards of Mt Paektu and the gunfire in the flames of the anti-Japanese war as his lullabies. Preserved in their original state in the log cabin are relics used by him in those days, including a desk, a pair of binoculars, a wooden pistol and a lamp. In front of its yard is a shallow well gushing out crystal-clear water in all seasons. A monument inscribed with the poem “Shining Star” President Kim Il Sung wrote in praise of Kim Jong Il greeting his 50th birthday stands near the log cabin, attracting the attention of visitors. 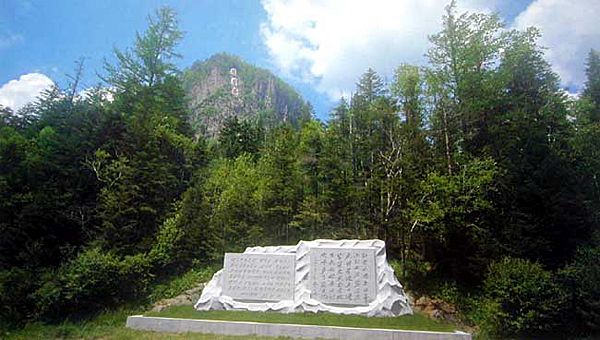 Jong Il Peak soars high above Mt Paektu,
Where the limpid Sobaek meanders.
Can it be the Shining Star’s 50th birthday already?
Admired by all for his power of pen and sword
Combined with his loyal and filial mind,
And unanimous praise and cheers shake heaven and earth.

A large number of people from home and abroad visit the place in the Paektusan Secret Camp, which is regarded as the cradle of the revolution, the native place of the revolution and a place dear to the hearts of the Korean people.