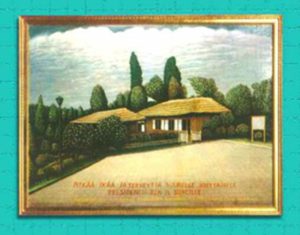 The gift was presented to President Kim Il Sung by a Finnish in April Juche 69(1980).

The oil painting “Native Home at Mangyongdae” is the one he drew personally in order to present it to the President on the occasion of his birthday.

When he conveyed the gift he expressed his feelings:
“The ray of the immortal Juche idea shines bright here in Finland too. I am holding in high esteem and following His Excellency President Kim Il Sung as the outstanding mentor who created the immortal Juche idea that holds the highest and most brilliant position in the ideological history of mankind. I prepared this gift in reflection of boundless reverence for His Excellency President Kim Il Sung who imbued us with bright future and taught us the way to live.

“It would be the greatest honour and happiness to me if His Excellency President Kim Il Sung would kindly accept this gift.” 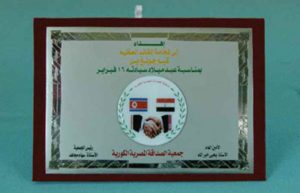 The gift was presented to Chairman Kim Jong Il by the Egypt-Korea Friendship Association in February Juche 97(2008).

The members of the association prepared the gift in reflection of their mind to hand down to posterity the friendly relations between the two countries on the occasion of the Chairman`s birthday.

In the upper part of the middle of the gift is engraved in Arabic the letters reading “Presented to His Excellency Great Leader Kim Jong Il on the occasion of his birth anniversary February 16”.

At the circular part is engraved the Arabic name of the association, the either edge of it decorated with laurel leaf symbolizing peace and friendship. And the national flags of two countries and the shaking of two hands below them are also depicted. 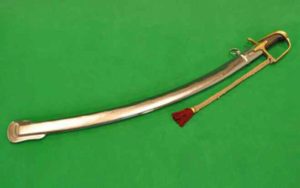 This is a gift presented to the respected Comrade Kim Jong Un by the president of the J.P. Enterprise Company of Poland in January Juche 101(2012).

Fascinated by the personality of the respected Comrade Kim Jong Un as a great man, he decided to present the sword, an heirloom he took over from his father.

From olden times, a sword has been regarded as a symbol of courage and wisdom, a treasured sword meting out disgrace and death to the aggressors and a gift to be presented to the famous generals. It also symbolizes bravery and happiness.Conveying the gift, he said: “I sincerely wish His Excellency Kim Jong Un would take hold of this sword to carry forward the leadership of His Excellency General Kim Jong Il till the end and good health for the true future of humankind.”