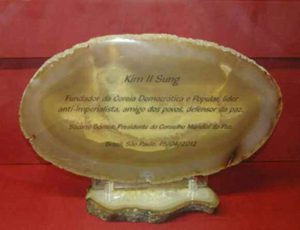 This is the gift presented to President Kim Il Sung by the president of the World Peace Council in April Juche 101(2012).

The WPC chief decided to present the agate craftwork engraved with the inscription praising the DPRK President as a show of his boundless reverence for him and went to Brazil`s Parana State to prepare the gift.

Agate which is a natural stone peculiar to Brazil is diverse in colour and does not easily corrode nor discolour.

Engraved on the gift are the inscription which reads:
“Kim Il Sung, founder of the Democratic People`s Republic of Korea, leader of the anti-imperialist struggle, friend of the world’s people and defender of peace, Socorro Gomes, president of the World Peace Council, San Paulo, Brazil,  April 15 2012”.

As he presented the gift, the WPC president said that the world’s progressive peoples highly appreciate the exploits of the great President Kim Il Sung who fought against all manner of domination and subjugation and devoted his all to peace and prosperity, and that he offers the gift on the occasion of the centenary of the President’s birth in reflection of the deep yearning of the world’s progressive mankind for him. 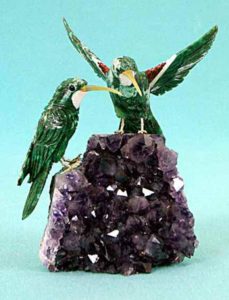 The gift was presented to Chairman Kim Jong Il by the president of the Party for Free Motherland of Brazil in October Juche 99(2010).

As he witnessed the reality in the DPRK where eye-opening events took place in succession despite the tenacious moves of the imperialists to stifle the country, the leader of the Brazilian party was deeply moved by the wise leadership of Kim Jong Il, a peerless statesman and outstanding Songun commander.

He prepared the gift out of his sheer desire to warmly congratulate the Chairman as he had invariably been elected as general secretary of the Workers’ Party of Korea at the Party Conference.

The gift is made of the unique gem of Brazil and represents a pair of humming birds seated on a rock.

It is said that the Brazilians regard the humming bird as a rare bird symbolizing love, friendship and freedom. 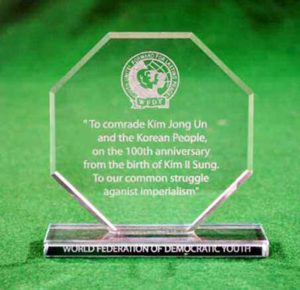 The gift was presented to Supreme Leader Kim Jong Un by the president of the World Federation of Democratic Youth in April Juche 101(2012).

The gift is inscribed with the emblem of the federation, its abbreviation “WFDY” and slogan “Youth, unite!” Also engraved on it are the inscriptions which read, “To Comrade Kim Jong Un and the Korean people, on the 100th anniversary from the birth of Kim Il Sung. To our common struggle against imperialism” and “World Federation of Democratic Youth”.

As he conveyed the gift, the chief of the WFDY said that he prepared the gift for the respected Comrade Kim Jong Un, leader of socialist Korea which is the beacon of hope of the world’s progressive youth and students, in reflection of the unanimous mind of the leadership and members of the WFDY. He added that bright is the future of socialist Korea holding Kim Jong Un as the supreme leader of the Party and people, as well as the future of the movement of the world’s youth and students.