Immense reverence for President Kim Il Sung who achieved immortal exploits for history and mankind is also clearly reflected in the gifts presented to him by the world’s progressive peoples. 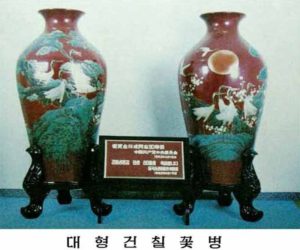 This gift was presented by the Central Committee of the Communist Party of China on the occasion of the 80th birthday of President Kim Il Sung.

The CPC Central Committee that admired the President as a veteran of the international communist movement and outstanding leader of the 20th century prepared a pair of large lacquered vases in reflection of the wish of its leading officials and members for his good health.

Chinese President Yang Shangkun presented the gift to President Kim Il Sung on a visit to the DPRK in celebration of his birthday in April 1992.

The bright sun represented at the upper part of the vase against the red background symbolizes the greatness of Kim Il Sung respected and praised by the entire mankind. 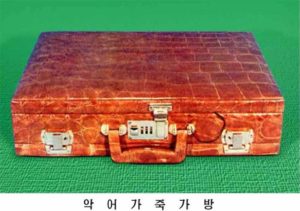 The Cuban people who value, protect and propagate the crocodile are said to present crocodile leather products or stuffed crocodile as gifts to heads of state and important figures of fraternal countries and staunch anti-imperialist fighters of other countries as a token of their highest respect for and trust in them.

The gift reflects the immense reverence of Fidel Castro and the Cuban people for Kim Il Sung. 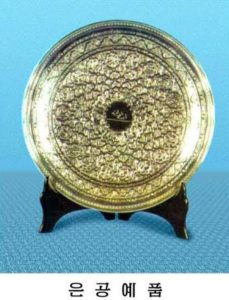 The gift was presented by Egyptian President Anwar el Sadat who had great trust in and reverence for President Kim Il Sung.

In February 1978 Sadat sent a special envoy to the DPRK to receive advice from Kim Il Sung on complicated problems arising internally and externally.

In March the same year he presented the silver craftwork as a gift to Kim Il Sung through the Egyptian Embassy in Pyongyang as a token of respect for the DPRK President who sincerely helped the Egyptian people a lot.

It is said that the Arabs present great men with silver craftwork as a gift as an expression of their high respect for them.

The gift is associated with heartfelt gratitude of the Egyptian President and people to President Kim Il Sung who rendered unstinting support and encouragement to their just cause.