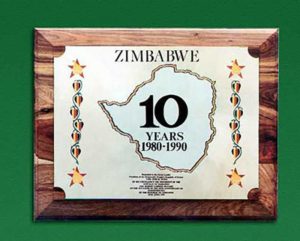 It is the gift presented to President Kim Il Sung from Robert G. Mugabe, president of the Republic of Zimbabwe in April, Juche 79(1990).

He presented many sincere gifts to the President at every opportunity including the major holidays of the DPRK as he had long respected the President as the lodestar of human emancipation and his teacher.

It was specially made in order to present to the President as a gift on the 10th anniversary of independence of Zimbabwe.

In the gift there are the letters reading “Presented to His Excellency Kim Il Sung, President of the Democratic People’s Republic of Korea By Robert G. Mugabe On the 10th Anniversary of the Founding of the Republic of Zimbabwe On April 18, 1990”. 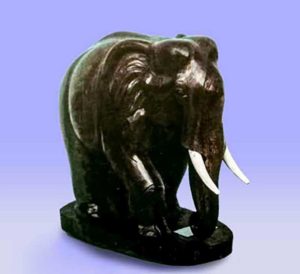 It is the gift presented to President Kim Il Sung from Kaisone Phombiane, chairman of the central committee of Lao People’s Revolutionary Party and president of Lao People’s Democratic Republic when he visited the DPRK in April Juche 81 (1992).

It portrayed an imposing elephant standing with his long nose let down.

It is said that Lao people present elephant sculptures to the most respected persons.

He had an ardent feeling of admiration for the President who had taken careful measures to send a lot of relief materials to the Lao patriotic armed forces and people every year when he waged anti-US national salvation struggle and even after the victory of Lao revolution.

Hence, he presented the wooden sculpture “elephant” to President Kim Il Sung as a gift when the President was going to meet his 80th birth anniversary. 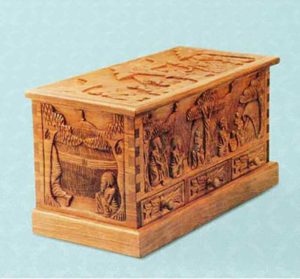 It is the gift presented to President Kim Il Sung by chairman of Tanzanian Revolutionary Party in June Juche 79(1990).

Tanzanian people are regarding as a token of most sincerity and great pride to offer the elaborately-made cases for valuables to the respected persons.

When he presented the gift to the President on his visit to the DPRK, member of the central committee of national executive committee of Tanzanian Revolutionary Party and secretary of the Party national executive committee said politely: “This is the gift comrade Nyerere chairman of Tanzanian Revolutionary Party presented to the great leader Comrade Kim Il Sung. It is the case for valuables made of mahogany in Tanzania. It is portraying the Tanzanian people in the struggle for building socialism in the principle of self-reliance upholding the Arusha Declaration.”