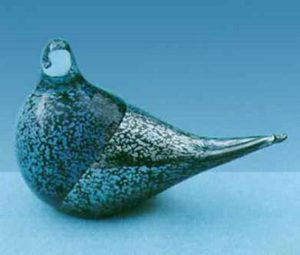 It is a gift presented to President Kim Il Sung by the president of the Olympia Air Travel Company of Finland during his visit to the DPRK in October Juche 79(1990).

When he knew that the reality of socialist Korea, which makes people be raptured in the state of happiness, was brought about by the people-centred policies of the Workers` Party of Korea, he was much excited by the sagacious leadership of the President. Therefore, he specifically prepared a craftwork that depicts a bird symbolic of happiness and longevity that have passed through among the Finnish people as a legend since long ago.

He felt deep in his heart that President Kim Il Sung was the great leader of the world’s people as well as that of the Korean people, he said, presenting the gift in reverence for him who built the DPRK into the model country of socialism. 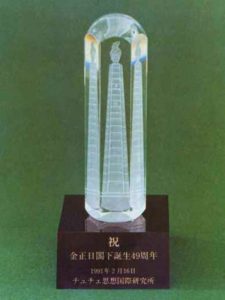 It is a gift presented to Chairman Kim Jong Il by the International Institute of the Juche Idea in February Juche 80(1991).

After having repeated discussions to prepare a meaningful gift, they decided to present a craftwork portraying the Tower of the Juche Idea in the mind that they highly appreciate the immortal exploits of the Chairman who had continuously enriched and developed the immortal Juche idea to illuminate the way ahead of the era of independence.

They selected crystal as the material for the gift by reflecting their firm resolve to only go along the road of Juche with the most pure and sincere reverence, and completed the design of craftwork through repeated deliberations of its content, form and details. After that, they asked a renowned business to make and complete the craftwork. 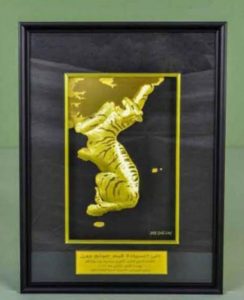 It is a gift presented to Supreme Leader Kim Jong Un by the president of Ahmadia Contract and Trading Company of Kuwait in January Juche 106(2017).

He selected pure gold to express his clean and constant feeling of respect for the Supreme Leader and ordered the united trading firm in Kuwait majoring in the production of souvenirs for heads of state and famous persons to manufacture the craftwork.

It depicts in detail and vividly the strips, teeth, claws and skin fur of a Korean tiger to give an effect of solidity. The gift reflects the strong courage and spirit of the DPRK that no countries dare to provoke it.