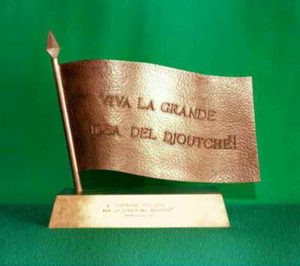 The gift was presented to President Kim Il Sung by the delegation of the Italian committee for the study of Juche idea on their visit to the DPRK in July Juche 70(1981).

The committee was formed in Rome, the capital city of Italy, in October 1980, comprising professors and PhDs including the president of Chieti University. They follow the Juche idea as an absolute truth and conduct solidarity movements for supporting the DPRK.

The members of the committee held collective discussions on the design of the gift and placed an order for it with a famous sculptor, who elaborately made the sculpture for several months. The gift mirrors their reverence for the President who gives joy and hope to mankind. 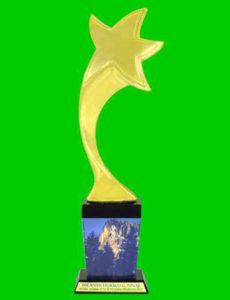 It is the gift presented to Chairman Kim Jong Il by the national chairman of the Better Nigeria Progressive Party to mark his 75th birth anniversary in February Juche 106(2017).

Conveying the gift, he said that thanks to the grand plan and under the seasoned and energetic leadership of Chairman Kim Jong Il, who was born in the simple log cabin in the forest of Mt Paektu, the DPRK demonstrated its inexhaustible might to the whole world.

The DPRK today is unthinkable apart from Chairman Kim Jong Il and its vigorous advance today is also inconceivable apart from his exploits, he noted, adding he prepared the gift in reverence for the Chairman who rose up as the shining star in Mt Paektu, the sacred mountain of Korea, and still adds bright light to the building of a powerful socialist country in the DPRK and the accomplishment of the cause of global independence. 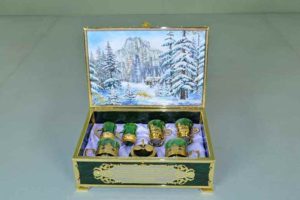 The gift was presented to Supreme Leader Kim Jong Un by the First Secretary of the Tartarstan Regional Branch of the Communist Party of the Russian Federation in August Juche 106(2017) on the occasion of the 72nd anniversary of Korea`s liberation.

With a deep respect and reverence for the Supreme Leader, he prepared the gift in 100 days` time with a rare natural gemstone dug from Lake Baikal, a world-famous scenic spot, by making a special order to his country’s excellent craftsmen on the occasion of the 72nd anniversary of Korea’s liberation.

On the inner side of the lid of the gem jewel box, in which the gem tea packet and tea cup are placed, the Chairman Kim Jong Il’s birthplace in the Paektusan Secret Camp is painted in gems.

The cover of the tea packet is decorated with two tea leaf patterns. the Tartar people have a custom of serving the most respected senior and honourable guests tea leaves which are regarded as the key to health and longevity.

The gift is associated with his sincere wish that the Supreme Leader would always be in good health and add shine to the DPRK as the most powerful country in the world.