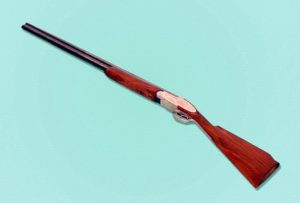 The gift was presented to President Kim Il Sung in March Juche 72(1983) by Yuri Vladimirovich Andropov, general secretary of the Central Committee of the Communist Party of the Soviet Union.

It is a double-barreled gun he specially prepared with profound respect and reverence for the Korean leader.

Russians have regarded hunting as the manifestation of wisdom and bravery, and a cheerful and noble undertaking which helps train their mind and body since olden times.

That is why presenting a hunting gun, the main means of animal hunting, as a gift is said to be an expression of high respect for counterparts.

The gift was specially made at a famous hunting gun factory of the former Soviet Union.

Conveying the gift to be presented to the President, Andropov said:

“I respect Comrade Kim Il Sung very much. As he has performed brilliant exploits for the socialist cause, he is unanimously being praised and respected by our Russians and the communists all around the world.” 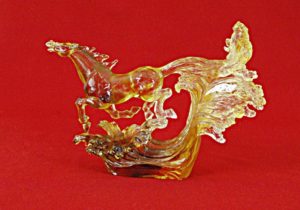 The gift was presented to Chairman Kim Jong Il by Aliyar Degani, general director of the United Gulf Construction Company in Kuwait.

The general director ordered Kuwait`s prestigious crystal handicraft company the gift and saw to it that the gift was made with utmost sincerity.

He learned about its making on several occasions and made sure that it was nicely made of crystal with the finest quality.

He ensured that the gift reflected his ardent wish that the Chairman would lead the cause of global independence to victory by dint of his powerful grit and courage and outstanding art of command.

Through the portrayal of the steed galloping spiritedly with its mane rising, he tried to show the heroic struggle of the Korean people rushing forward dynamically with indomitable faith and fighting spirit, rallied firmly behind the Chairman.

Written in English in the inner part of the cover of the gift box are such letters as “To His Excellency Kim Jong Il, the great leader of the Korean people. February 16, 2011. 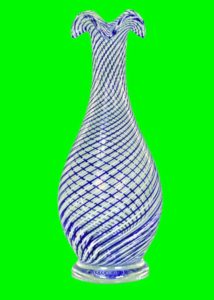 The gift was presented to Supreme Leader Kim Jong Un in October Juche 106(2017) by Mehmet Weznur Alkhan, professor of Istanbul University in Turkey.

The vase was made by a traditional method by a Turkish manufacturer.

It has twisted stripes on the body and floral leaves on its vent.

For its lucidness and transparency, it is also called an “oriole`s eye” in a figurative sense.

It is a famous handicraft in the traditional cultural heritage list of Turkey.

Flower has been a symbol of peace since ancient times.

The gift mirrors the genuine sentiment of the professor wishing that the Korean people would reliably safeguard peace on the Korean peninsula and the rest of the world under the wise leadership of the Supreme Leader and that he would lead the Korean people to peace, prosperity and bright future in good health.